Craziest thing tonight - an impromptu fire occurred in our town just a few blocks over from home. Turns out, it was the land that our 2nd child had been born on. The house itself had been taken down a few years before, but the old, grumpy-yet-stoically aged barn and the rugged trailer had remained. Today, the both joined the old home in forms of ash and rubble. 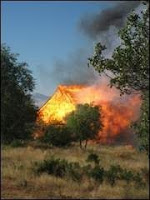 12 other homes have also been lost thus far tonight in a neighborhood nearby. It seems this fire is moving north. Had it moved west we'd have been evacuated and displaced, but instead, we sit here mourning the loss of a place filled with memories for two families, five children, four dogs, and a couple of lazy owls that made home in that barn. Someone needs to tell the Punk House residents.


Thank you, Washington Street, for providing a place for punks, country singers, newly-in-love couples and small children alike to call home and feel safely tucked away.
Our prayers and safe wishes go out to the families who have lost their homes and treasures tonight...
Posted by Sporty Mama Says at 9:14 PM